It’s that time of the year, Las Vegas season is in full swing.  Starting in the spring, party-goers from all over the globe can come to Vegas and enjoy some of the best music and most spectacular clubs in the EDM world.  Last year, Omnia set itself apart as one of the premiere destinations on the Las Vegas strip.  Superstar producer/DJ Martin Garrix will be making his 2016 Las Vegas debut this Saturday at Omnia.  He won’t be alone though, he’ll be bringing along recent collaborators Matisse & Sadko for three dates in Vegas over the next week.

On the heels of  their huge tracks with Martin, “Dragon” and “Break through the Silence,” the Russian DJ/producer duo has been on a roll with their festival favorite “Lock ‘N’ Load” and the collab “SLVR” with Steve Angello.  Matisse & Sadko will make their Omnia debut tonight prior to Martin Garrix’s set.  They’ll open for Martin at Omnia again on Tuesday and at Wet Republic for a day party on Saturday, April 23

Amber Rose  will be at 1 OAK Nightclub inside The Mirage Hotel & Casino. Talk show host and model Amber Rose will host at 1 Oak Nightclub Tonigh with sounds by… 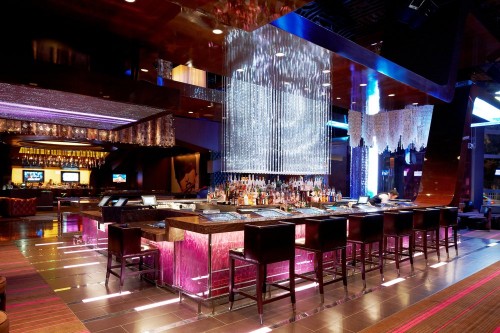 The World May Not Be Enough, but the Bond Bar in Las Vegas Is! Everyone wants to be James Bond, 007 and strut up to the bar and order a…

Criss Angel Does it Again, MINDFREAK LIVE! is a Must See Spectacular. You won’t know what’s in store as Criss Angel takes you on a mind warping adventure with co-star…

Jay Sarno removed the apostrophe from Caesars Palace, declaring the resort was for everyone and everyone was Caesar. The Apostrophe Bar at Caesars Palace is located near the entrance to…

by Kat Bein of Billboard.com   Days after Wynn Nightlife announced an exclusive three-year residency with The Chainsmokers at its XS and Encore Beach Club properties, the entertainment company unveils…

Las Vegas Nightclubs and Super Bowl Sunday With so many places to watch the Super Bowl in Las Vegas it can be hard to choose. While most people think of…

LAX Nightclub will host the Official Helldorado Days PBR After Party Tonight. The nightlife hotspot will go country for one night to welcome Helldorado Days to Las Vegas and will…

13 May 2016
We use cookies on our website to give you the most relevant experience by remembering your preferences and repeat visits. By clicking “Accept”, you consent to the use of ALL the cookies.
Do not sell my personal information.
Cookie SettingsAccept Reject All
Read More
Manage consent