Hall of Fame Broadcaster Al Bernstein will host a special live event for boxing fans Friday, January 27, from 6-8 p.m. at the Losers Most Wanted Bar at the MGM Grand Hotel and Casino as part of the fight week festivities for the Leo Santa Cruz-Carl Frampton championship rematch. This official pre-fight party is sponsored by Corona Extra Cervesa Mas Fina and it will feature interviews with champion boxers, Q & A with Al Bernstein, boxing trivia for fans to win prizes and a viewing of the first exciting match between Santa Cruz and Frampton. The first 50 fans to attend will receive a signed copy of Bernstein’s book, “30 Years, 30 Undeniable Truths About Boxing, Sports and T.V.” Award winning artist Richard Slone will be signing official fight posters, which he designed. The event is open to the public.

The January 28 Frampton-Santa Cruz featherweight title match will be seen on SHOWTIME, starting at 10 p.m. ET/7p.m. PT Bernstein will be ringside to announce the fights.

Nervo at Omnia this Saturday!

Nervo @ OMNIA  Saturday Oct. 8th The sisters’ new single “Anywhere You Go” with Timmy Trumpet should get the crowds out on the dancefloor at Omnia. For Free Club Passes CLICK… 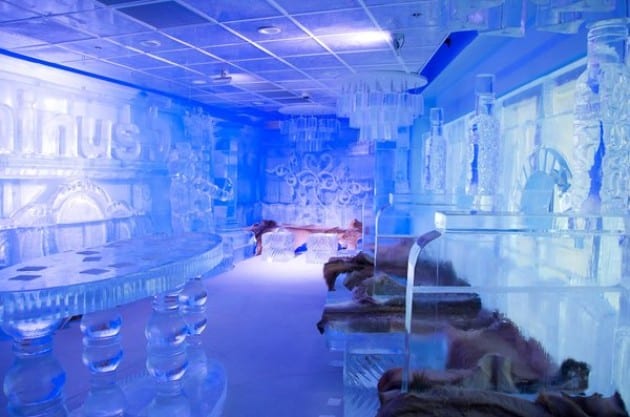 The Coolest Bar in Las Vegas

Have you Visited the Coolest Bar in Las Vegas, The Minus 5 Ice Bar In Las Vegas, a good drink and good service are always expected, but it’s the unexpected that…

Ja Rule rocked a packed house at LAX Nightclub inside Luxor Hotel and Casino on last weekend, as LAX continued it resurgence with it’s latest headliner. The New York rapper…

08 Jun 2016
What to Wear to Las Vegas Nightclubs: An insider’s perspective

Kesha finished off her mini-residency at the Intrigue Nightclub in Las Vegas with a BANG.  Using the final night of her residency to kick off her new 17-city tour will…

Las Vegas has plenty of restaurants that provide fine-dining. As for high-end Mexican cuisine located in the spectacular ARIA Resort and Casino in a lively setting with eye-catching décor, and…

Nightlife in Las Vegas is a feast for the senses. An arresting combination of sight, sound and movement plunges visitors into an immersive adventure made possible by technology. It’s not…

Luxury Las Vegas Hotels To accommodate some of it’s High Rollers, Las Vegas it home to some of the most Luxurious hotels in America.  In fact, Vegas has more than half…

Since opening in the former Jaguars building just west of the Strip in May 2015, Embassy Nightclub has provided a true alternative in the Las Vegas nightlife scene, filling a…

01 Jan 2016
We use cookies on our website to give you the most relevant experience by remembering your preferences and repeat visits. By clicking “Accept”, you consent to the use of ALL the cookies.
Do not sell my personal information.
Cookie SettingsAccept Reject All
Read More
Manage consent